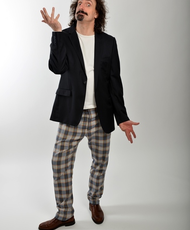 Addy van der Borgh has that rare talent of making people laugh as soon as he walks on stage. He is a great performer of highly acclaimed and original material. His ability was noticed immediately by the BBC and he appeared on the ‘Stand-up Show’ on BBC1 after only one year as a comedian.

He has subsequently appeared on ‘The World Stands Up’ and ‘Live at the Comedy Store’ for Comedy Central, and the BBC3 series ‘Brain Candy. He has also written and co-presented twenty episodes of ‘TV Meltdown’ for Sky 1 with Kirsty Gallacher, has acted in a number of voiceovers for radio and television and has appeared on many radio shows including multiple appearances on the legendary ‘Loose Ends’ on Radio 4.

‘An excellent stand-up with intelligence and wit’ The Guardian