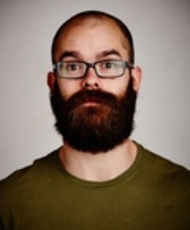 Chris Betts has performed all across Canada, the United States and the UK at independent venues, comedy clubs and international festivals including Dave’s Leicester Comedy Festival, SXSW and the Zulu Comedy Festival. Chris moved to London and in 2014 was chosen to be appear as part of the prestigious package show The Comedy Reserve at the Pleasance during the Edinburgh Fringe Festival. He was recently a finalist in both the Leicester Square Theatre New Comedian of the Year competition and the 201 NATYs (New Act of the Year) at the Bloomsbury Theatre. Chris has a style that is equal parts confident, thoughtful, ridiculous and mischievous and has been entertaining audiences across the UK ever since his arrival.