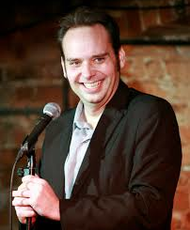 If you want serious comedy David Tsonos is not your man. His comedy stems from being the youngest of five boys, babysitting his nephews and his cat.

He has appeared at the Vancouver Comedy Festival and can be heard on Satellite radio. Whether it’s a Bar gig, a Comedy Club or a Corporate function David makes them laugh until they can laugh no more. (Well maybe a little more.)

David has toured Canada and the USA – and is now based in London.

“Very confident, knows his material totally and had the crowd roaring. Good face and voice for comedy, great timing” The Stand