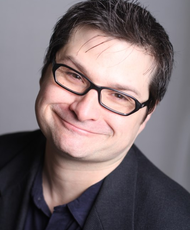 Originally from Seattle, Erich joined ranks and became a British citizen and is highly regarded for his humorous and insightful take on living in the UK.

His 2012 show The Brit Identity received numerous Four Star reviews. ‘It was a joy to be an audience member…masterful hour of piss taking.’ (Broadway Baby)

The Brit Identity followed his appearance in the hugely successful Edinburgh Fringe as part of the highly regarded AAA Stand-Up Late at The Pleasance in 2010.

In 2006 he received a Total Fringe Sellout Award for his Edinburgh show Brokeback Britain, Erich is renowned for his ‘great gags’ (The Stage), and is described by The List as’ hilariously insightful’ and as ‘excellent’ by Time Out.