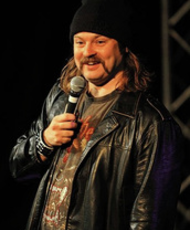 In recent years Glenn has hit the International circuit in a big way, performing to huge crowds in Singapore, Holland, Dubai, New York and Los Angeles. He’s also a popular addition to many of the great Summer music Festivals in the UK, including Reading & Leeds, Latitude, Bestival, Download and of course Glastonbury.

Glenn is a regular TV face having made appearances on John Oliver’s New York Comedy Show (USA), 7DAYS (NZ), Melbourne Comedy Gala (AUS), Funny as Hell (HBO/CAN) Russell Howard’s Good News (UK), Never Mind The Buzzcocks, The BBC Stand Up Show, The Live Floor Show, 28 Acts in 28 Minutes and The Comic side of Seven Days for the BBC. The World Stands Up, Comedy Blue and Edinburgh and Beyond for Comedy Central,

“Effortlessly funny with an affability that other comics can only dream of – You have to go and see Glenn Wool. ”The Guardian