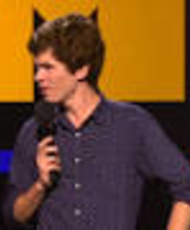 Apologetic Eton and Oxford alumnus Ivo started stand-up in 2009 at the age of eighteen and eight months later became the youngest ever winner of the prestigious So You Think You’re Funny award for new acts at the Edinburgh Fringe. This led the following year to nominations for Chortle Best Newcomer and Leicester Mercury Comedian of the Year, and performances at Montreal’s Just For Laughs Festival and the Hollywood Fringe.

Since leaving university in 2012 he has become a regular fixture in the clubs and theatres of the UK comedy circuit, with a gauche charm and crafty, self-aware wit which has proved a hit with audiences of all ages, and led to appearances on BBC3’s Edinburgh Comedy Fest Live, Comedy Central’s Live at the Comedy Store, and various shows on BBC Radio 4, Five Live, and XFM. His two solo hours, 2013’s Binoculars and 2014’s Bow Ties & Johnnies, had sold out runs at the Edinburgh Fringe and London’s Soho Theatre, and received a clutch of four and five star reviews, the latter described by the Evening Standard as ‘a joyous show… if you like your comedy with long words and beautiful linguistic flourishes, buy a ticket immediately.’

Most recently he has appeared on both Live at the Apollo and Mock the Week.