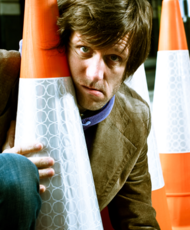 In 2006 Luke did his first stand-up gig and in 2007 won the prestigious Hackney Empire New Act of the Year award. He has gone on to perform at all the top Comedy clubs in the UK and taken award winning shows to the Edinburgh Fringe.

“…one of my favourite comedians and people.
I wouldn’t be doing comedy if it wasn’t for Luke.
So if you hate me, blame him.” Joel Dommett