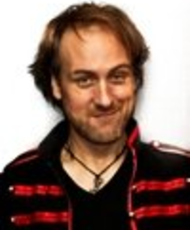 MITCH BENN is not only one of the most sought-after acts on the comedy circuit but is widely acknowledged as one of the best writer/performers of comic songs in the country. Mitch began his comedy career in Edinburgh in 1994. He moved to London in 1996 and quickly established himself as a comedy club “headliner” as well as a favourite on the university circuit.

Mitch is a regular writer and performer on “The Now Show” for BBC Radio 4 and “It’s Been a Bad Week” for BBC Radio 2. Three series of his successful Radio 4 show, “Mitch Benn’s Crimes Against Music” have been broadcast so far. He also presents “The Mitch Benn Music Show” on BBC Radio 7.

“Song after song of exquisitely crafted satire” The Scotsman