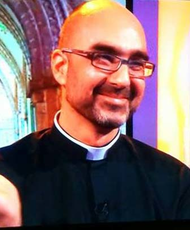 Ravi Holy is the Vicar of Wye by day and a comedian by night. He won the Canterbury Festival’s comedy competition in 2016 and was voted Funniest Vicar by the four Inbetweeners after performing live on the One Show (although to be fair, there were only two other contestants!)

’ I booked Ravi because I knew he would add something different to the night. He succeeded so spectacularly that I took several minutes to reset the atmosphere of the room after he came off stage to make it easier for the next act. Excellent, hilariously funny, can’t wait to have him back!" – Al Cowie, Promoter of Laugh Comedy at the Ram Brewery, Wandsworth