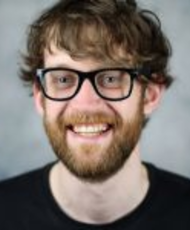 Rob Mulholland fell into comedy after finding a flyer for a local festival on the ground. In the years since, he has performed all over the UK and even overseas performing in Holland & Norway. Rob has built up an incredible reputation amongst booker’s and clubs and is now a regular feature in most of the UK’s well known comedy clubs.

Rob has won a host of awards including Hilarity Bites New Act of the Year, the famous Beat the Frog World Series, Funhouse Comedy Champion of Champions and in 2016 he was also a finalist in the prestigious Leicester Mercury Comedian of the Year.

Not only has Rob been busy filling his trophy cabinet but he has also provided tour support for Paul Chowdhry, Nick Helm, Gary Delaney, and has become a regular feature on the iconic panel tour show ‘Panel Beaters’ where he plays the role of Death.