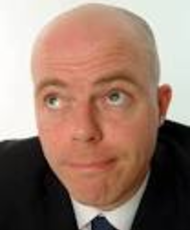 Roger Monkhouse is one of the most original and distinctive acts on the comedy scene. A consummate stand-up who employs a deadly combination of charm and menace to exert a masterful control over any audience. A highly original and quirky performer, Roger’s trademark stage-prowling style and curious, inimitable manner have established him as one of the hottest names on the comedy circuit.

Distinguished as a comic by his eloquence and keen eye for a fine phrase, Roger’s easy observational style is spiked by the signal flares of an accomplished gag writer. A supremely confident compere and seasoned corporate host, Roger is happy to improvise freely with a crowd and is at great ease bantering with an audience, but has no shortage of first class observational material in his armoury.